A Handful of Souls - Editing 2

I just finished my personal edits for

A Handful of Souls
The grim tail of one girl's struggle to let go of the loved and lost.

I've broken the last chapter into three, so there are now 27 chapters, all of fairly equal length, and altered the ending to give Cat a break. I put that girl through a lot and she deserves it.
Then sent it all off to get the copyright process underway.
My editor Kayla M. Ware, has begun her professional edits and a cover is still in the works.

Once it's all edited nicely, it'll be time to look for a literary agent.
Posted by K. J. Bailey at 11:03 AM No comments:

A Handful of Souls - Editing

is currently in editing.

I, myself, am going through each chapter (currently on 13 of 25) making revisions, while my editor has begun with the first four chapters.

My artists is also working on a final image for the cover art.

While we're working on those, I made this little animation of the ring in Blender.

A Handful of Souls - The End It's done, the final chapter is written along with the epilogue. It's not perfect, the last chapter will probably be split into two, but the story is done. Got emotional. So tired now. Wild ride, glad I got it out.

During the siege, Cat encounters a Paladin, one and the last of the ancient Order that originally defeated the evil, forcing it into the ring ages ago. The truth of the ring is revealed, as is its weakness.

Wild ride, at least for me, glad I got it out. Now for months of editing!
Posted by K. J. Bailey at 4:06 PM No comments: 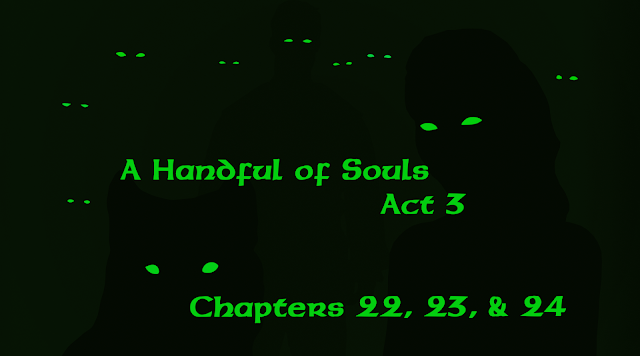 Three more chapters have been written and the next has begun. This is the homestretch, just a few more and the tale is done. I'm feeling pretty good about it. I've gotten so much writing in these past few weeks and I'm still enjoying the story. I can hardly wait to share it with the world.

During these chapters, the ring repels an attack on the conquered town of Kolmas with brutal efficiency, adding the slain to its swelling ranks. Knowing more will come to avenge those that fell, sights are set next on the local magistrate's castle, its walls predicted to be invaluable in the battles to come.

Marching only at night to conceal their approach, Cat and her companions are given a day of reprieve from being dragged along with the horde of undead. Then, mistakenly showing some last shreds of defiance, Cat is given a terribly harsh lesson as to her place in the ring's vile machinations.

And now, forced to endure more horror, the siege begins.

Excerpt from chapter 22
Her left hand shook with the effort, challenging death itself, and one by one, men began to rise. They came to their feet as if waking from a nap, sagging and limp but rising all the same, their mounts with them. Loose fingers clenched around spear, sword, and shield as if in remembrance of final desperate moments, though none uttered a word. There was only the sound of scraping plate and jingling chain as the soldiers rose, still dripping blood back into the many pools they left. As more found their feet, the resistance on the spell lightened, and by the time Cat's hand was fully extended, all who fell stood again.
Posted by K. J. Bailey at 10:34 AM No comments: 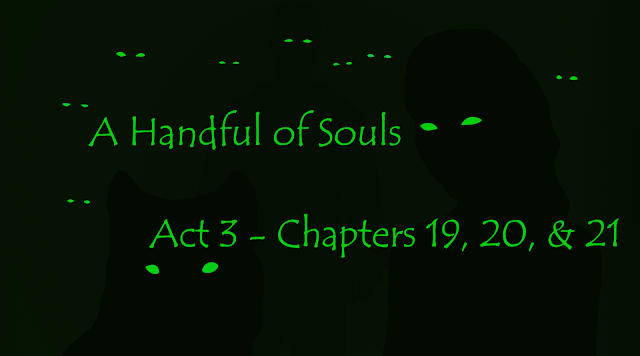 I am proud to announce the completion of 3 new chapters for my upcoming drama/horror adventure, 'A Handful of Souls'

A tale of friendship, loss, and sacrifice.
Better than, love, loss, and necromancy? No romantic love in the story. Felt that was how it was sounding. Let me know thoughts.

In these chapters, Cat and her newly arisen travel to Kolmas. On the way, they learn of a force being assembled to hunt them down, bringing on the need for a swift and violent take over of the town. Then, with the population of Kolmas added to the ranks of undead, the ring bides its time, letting its enemies come to it.

Taken from her pondering by the ring suggesting a few wraiths, Cat summoned the ghastly horrors. Watching the floating azure torsos drift swiftly through walls and across streets, gathering fearful souls in skeletal arms like so many ripe fruit, she wondered just how far she was willing to go to have her wish come true. Or, even doing all she could to ensure it, if there would be enough of her left to see it through. 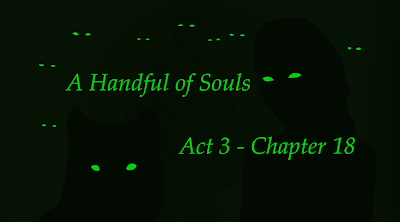 Cat searched the sky, clear blue and uncaring, then back to the souls of the children. If even the gods had no mercy, then what good was it? She uttered the words of the harvesting spells, then those that lifted their bodies from the dirt.

The small empty vessels joined the caravan of corpses.
And the gods did nothing.

Chapter 18 begins the third and final act of this dark tale.

Cat has recovered enough to begin the march from the decaying husk of Toenin. With wagons and an escort of fresh wights, eyes are set on the unsuspecting town of Kolmas, where many more souls await the grim reaping.
Posted by K. J. Bailey at 7:44 AM No comments: 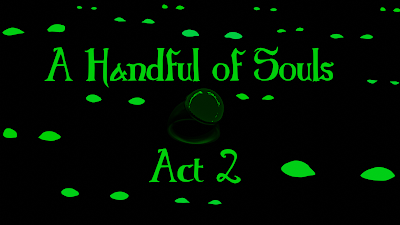 Chapter 17 is finished, a very short chapter that concludes Act 2 of 'A Handful of Souls'
A tale of love, loss, and necromancy.

After being burned alive as a witch, Cat's battered, flame seared body, is rescued from the stake amid the merciless slaughter of Toenin's residence.

Under the care and protection of her companions, Cat tries to recover from many wounds, both physical and mental.

But the ring, newly charged by the souls of Toenin, is eager to resume its foul plan.